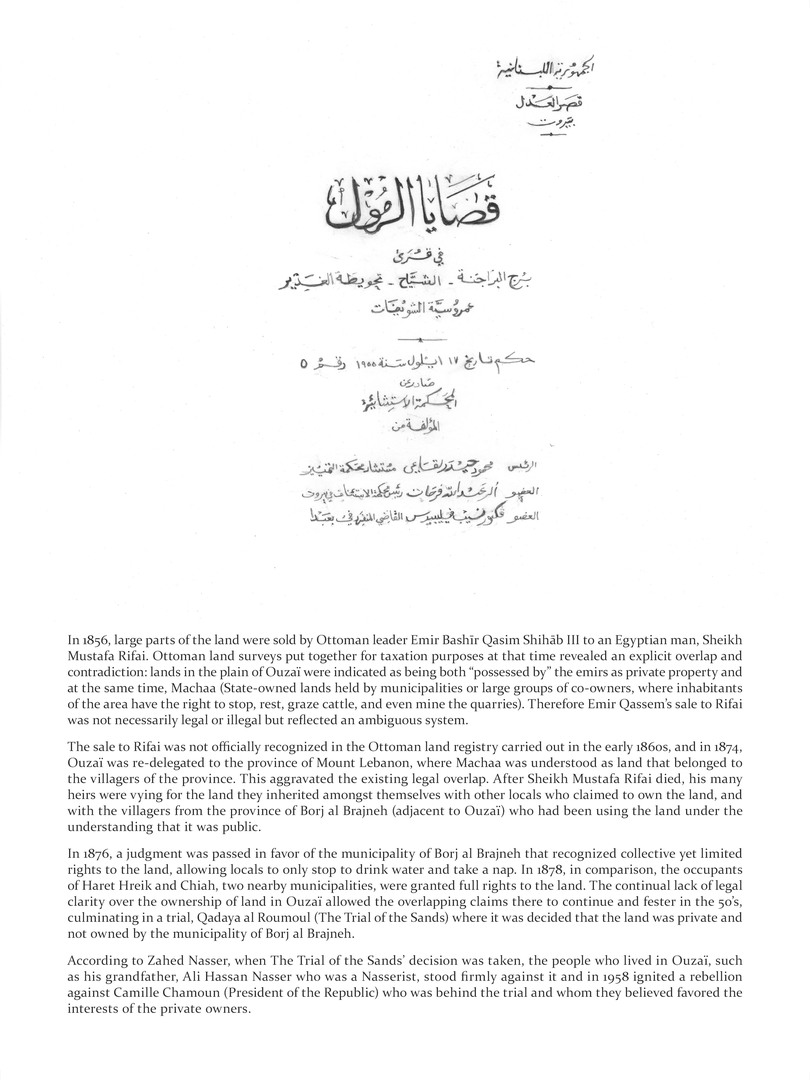 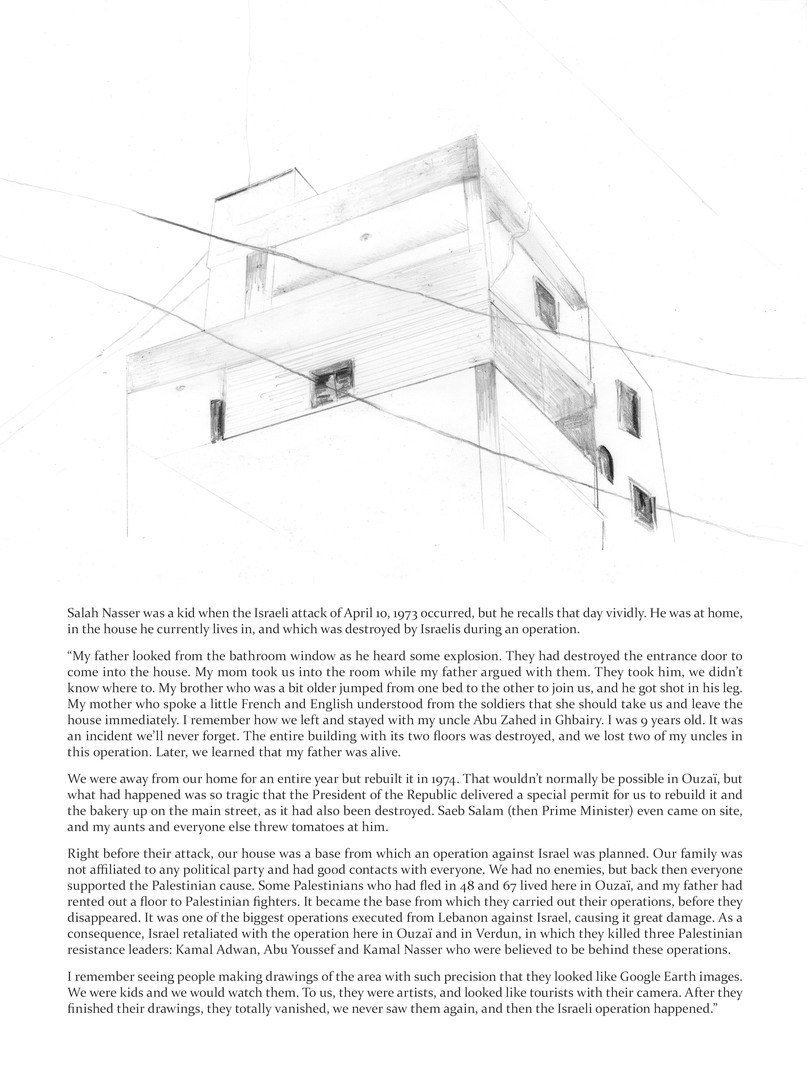 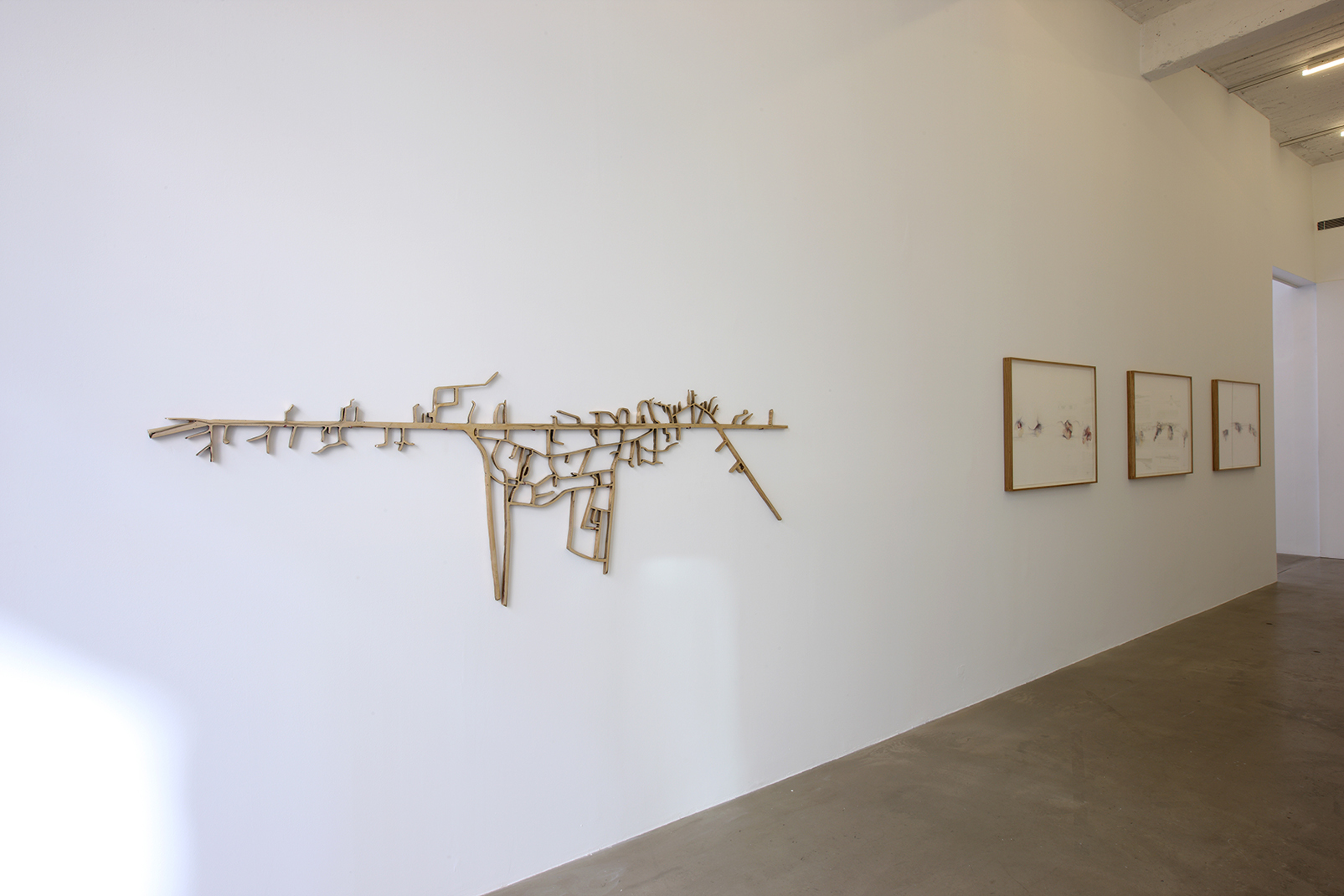 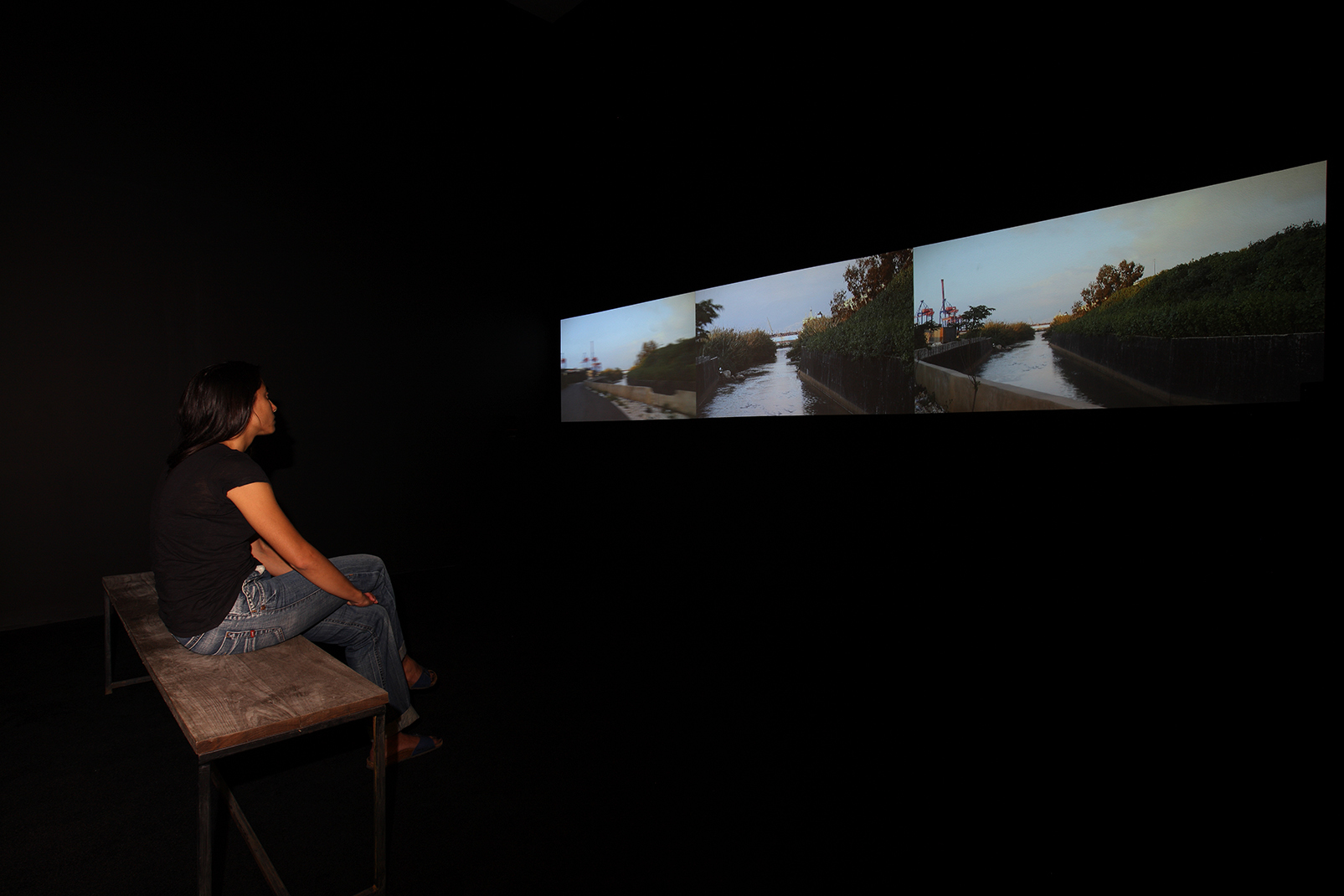 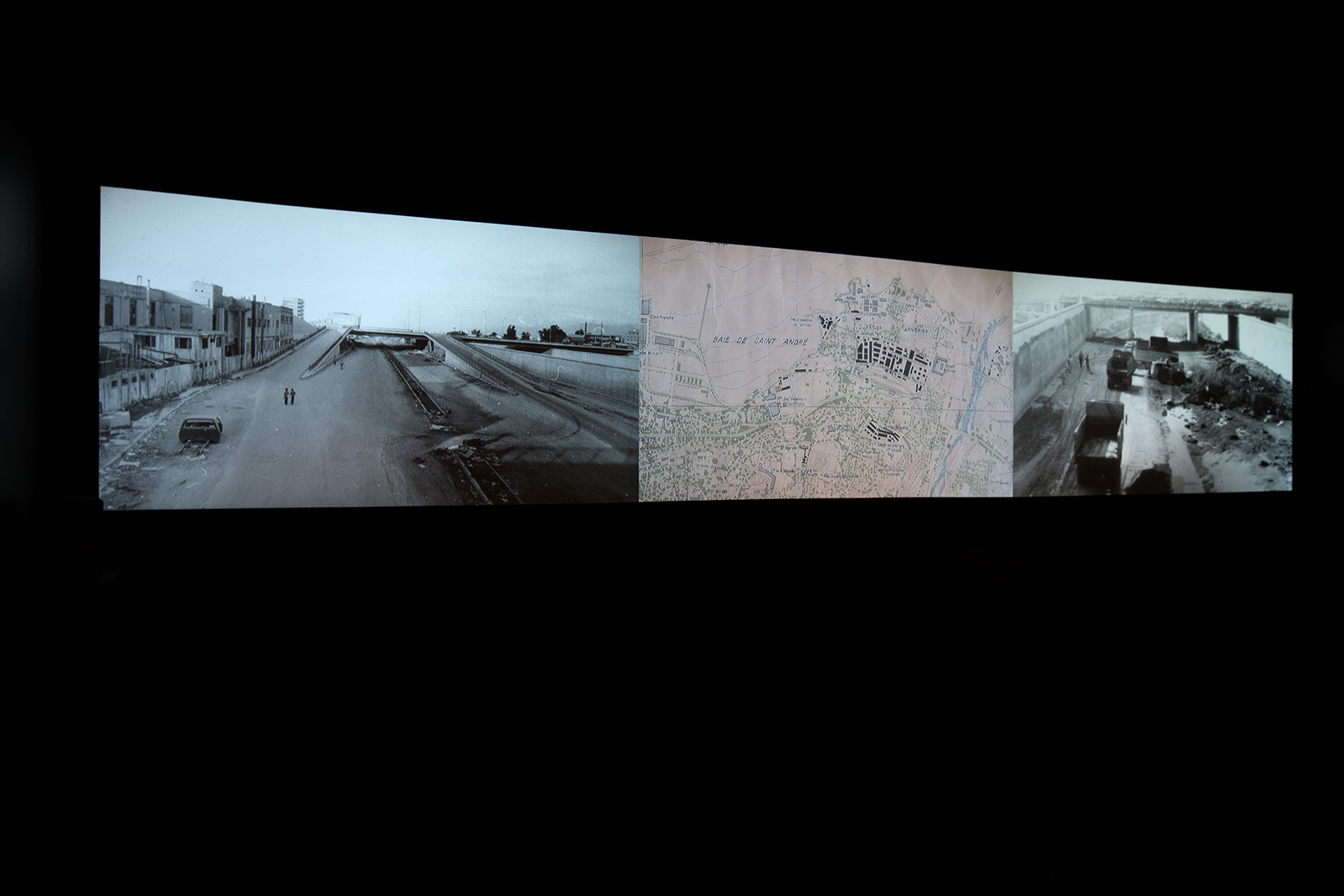 In her multi-chaptered project Under-Writing—Beirut, Lamia Joreige investigates historically and personally significant locations within Beirut’s present. Like a palimpsest, the project incorporates various layers of time and existence, creating links between the traces that record such places’ previous realities and the fictions that reinvent them. Mathaf (2013) was the first chapter. Nahr, the second chapter (2013-2016), and Ouzaï, the third chapter (2017- ongoing), are both presented for the first time in Lebanon in the artist’s solo exhibition at Marfa’.

How has political decision-making or lack thereof transformed these areas and the communities that inhabit them? How does this translate into everyday life, making these areas, spaces where Lebanon’s most crucial problems converge? What kind of narratives can emerge from and be triggered by such places, rather than represent them?

In Under-Writing Beirut—Nahr (The River), Lamia Joreige uncovers the different facets of Beirut’s River with its recent and rapid transformations, from dumping ground to a place scheduled for ambitious development. While defining the eastern edge of the city, the river now flowing weakly both connects and separates Beirut and its suburbs. The work invites reflection on the interwoven narratives of the river, its surroundings and the people who live and work around it, particularly the urban area named Jisr el Wati.

Joreige’s series of drawings The River (2015-2017) are inspired from various maps of the river. In her three-channel video installation After the River (2016), she explores notions of borders and landscape and reflects on the diverse migrant population that has historically settled along the river’s banks. She studies the potential for gentrification of this area, one of the few remaining unexploited spaces in the capital. Amidst the rapid development of what has long been a derelict piece of land into a place of interest for art practitioners and real estate companies, and with the ambitious plans to rehabilitate the river and expand the city, and the influx of refugees and migrants, the future of the river is unknown, as is the fate of all the communities living in the area.

It is in a similar spirit that the project Under-Writing Beirut takes up the histories and dynamics of Ouzaï. For a long time, this area south of Beirut was unoccupied and undefined. In the 1950s, as the city outgrew its ramparts, the land on its edges, useless for agriculture, became more valuable. The southern suburbs saw some substantial state investment as part of a growing, modernizing metropolis.

The first inhabitants of Ouzaï were almost all rural Lebanese driven towards Beirut by a changing economy. From the nineteen century onward, the continual lack of legal clarity over the ownership of land in Ouzaï allowed the tension to fester in the 50’s, culminating in a trial, where it was finally decided that the land was private. This caused a spurt of informal (and, according to the decision of the trial, illegal) construction. The contested ownership, along with the weak regulatory power of the state and the fact that many properties were owned by a large number of co-owners, created a favorable ground for people who, looking for a better life near the capital or later fleeing the violence of the war, would settle there illegally.

The period preceding and during the Lebanese war saw a radical transformation of the area. The regular bombarding and then invasion of the Southern villages of Lebanon by Israel, led to the displacements of thousands of villagers, mainly Shias. Many of them first settled in Beirut Eastern suburbs, before they were forced to flee again following the massacres led by Christian militias in 1976. They then settled in the Southern suburb of the city, now commonly called ‘Dahiye’. As a result, the area saw the solidification of a Shia community, and an even further densification of informal, mainly illegal settlements.

Today, while Hezbollah’s impact is strong, the area is more heterogeneous than the common monolithic understanding of “Dahiye” implies. Ouzaï has a complex, multilayered history, and its varied mix of commercial activities demonstrates a socioeconomically diverse neighborhood.

In digging into the history of this area, the artist hopes to extend the reflection to larger ideas evoked by such space. Indeed, Ouzaï is a small area, which carries its own history, but somehow it seems to encompass the quintessence of what is facing all of Lebanon now – issues of sectarian division, displacement, community, over-urbanization, inequality, reconstruction, reconciliation, gentrification, etc.

In making artwork motivated by this place, while trying to think outside of the political division, and to maintain a critical distance, the artist is asking what real or imagined narratives such space triggers that might translate into poetic forms? Can any transformation be possible or imagined in this landscape? How might art transcend or think outside of both stigmatizing and pathologizing rhetorics?

This exhibition will present the early stages of this artistic research to introduce the ongoing project Under-Writing Beirut — Ouzaï.